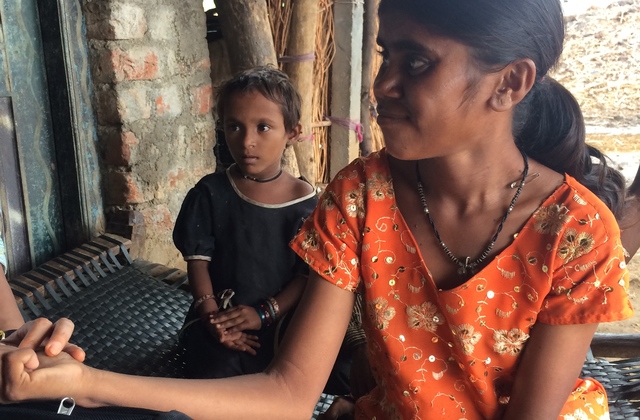 Dharmishta has suffered from epilepsy since she was a tiny baby, and has been living with her illness for 15 years now. The symptoms have only worsened as she’s gotten older, and she often suffers up to five epileptic fits a day. What makes this even harder is that epilepsy is still considered a mental illness in India, and there is great stigma attached to this disorder. Because of this, Dharmishta’s chances of learning a trade and becoming independent were extremely low.Her parents visited local faith healers yearning for a cure, but they soon realized no improvement was occurring and thus, lost hope. Her mother’s initial experience with a MINDS Foundation worker prompted the family to look optimistically at the situation again and seek medical treatment for Dharmishta: “It was the MINDS social worker who showed a video on educating about mental illness, during an awareness camp in our village. We approached him for help for our daughter.”

With the support of MINDS, Dharmishta began treatment at a partner hospital, Dheeraj hospital, one year ago. She has tackled a strenuous journey, which has led to a positive outlook: today, over 17 years after her first confrontation with epilepsy, she experiences zero fits a day.

As she walks into the hospital with a smile, she is prepared to continue fighting, in order to fulfill her dream of becoming a tailor. Though she has a while to go — it’s too early to label this a “happily ever after” — MINDS is optimistic in a promising future for her.
Thousands of patients in rural India, alike to Dharmishta, face obstacles prior to, during, and post their progression in combating mental health. We need you to assist them in facing these challenges. We need you to make it possible for them to achieve their dreams. We need you to support them in putting their illnesses behind.